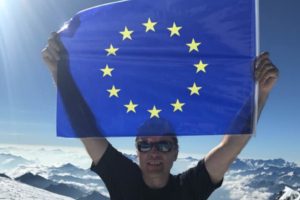 I was born in 1970 in Chambéry, « Europe’s Alpine crossroads », in a border region open to its neighbours, to tourists from all over the continent and to citizens of the world come to enjoy the skiing and winter sports.

I became European by listening to my parents narrating their vivid memories of World War II from the Italian occupation to Nazi atrocities, by entering soccer tournaments across the Alps and collecting posters of players from all over Europe (including the « Eastern bloc »), and even by exploring my Piedmontese origins and then deciding to learn Italian later on in life after learning English and Spanish at school. 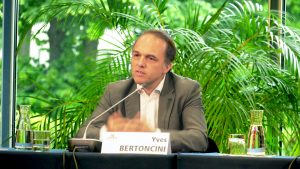 My « European education » continued whilst I studied at the University of California in Berkeley, where I instinctively felt European whenever I met my compatriots from other EU member states, and where I became aware of the way the world was pivoting towards the Pacific; whilst I was a policy officer with the French Embassy in Algiers, in a North African country where the Europeans’ unity is easier to perceive when it is often played down in our national debates; and lastly, whilst having had the good fortune to study at the College of Europe in Bruges, where Europe became more than just a great idea for me, it became second nature.

Since then, I have had a chance to build up a range of very different experiences, yet all of them with Europe as their lodestar:

My experience in all these fields has allowed me to meet countless players, militants and critics in the European construction process both in France and in every one of the European Union’s member states.

I have had the immense good fortune to work with such inspiring public figures as Michel Barnier, Jacques Delors, Enrico Letta and António Vitorino, all of whom have taught me to temper my European idealism with a pragmatic vision.

I use the skills that I have developed as an expert and pathfinder in European affairs both in the context of my professional activities and as part and parcel of my militant commitment, reflected in the website www.yvesbertoncini.eu.