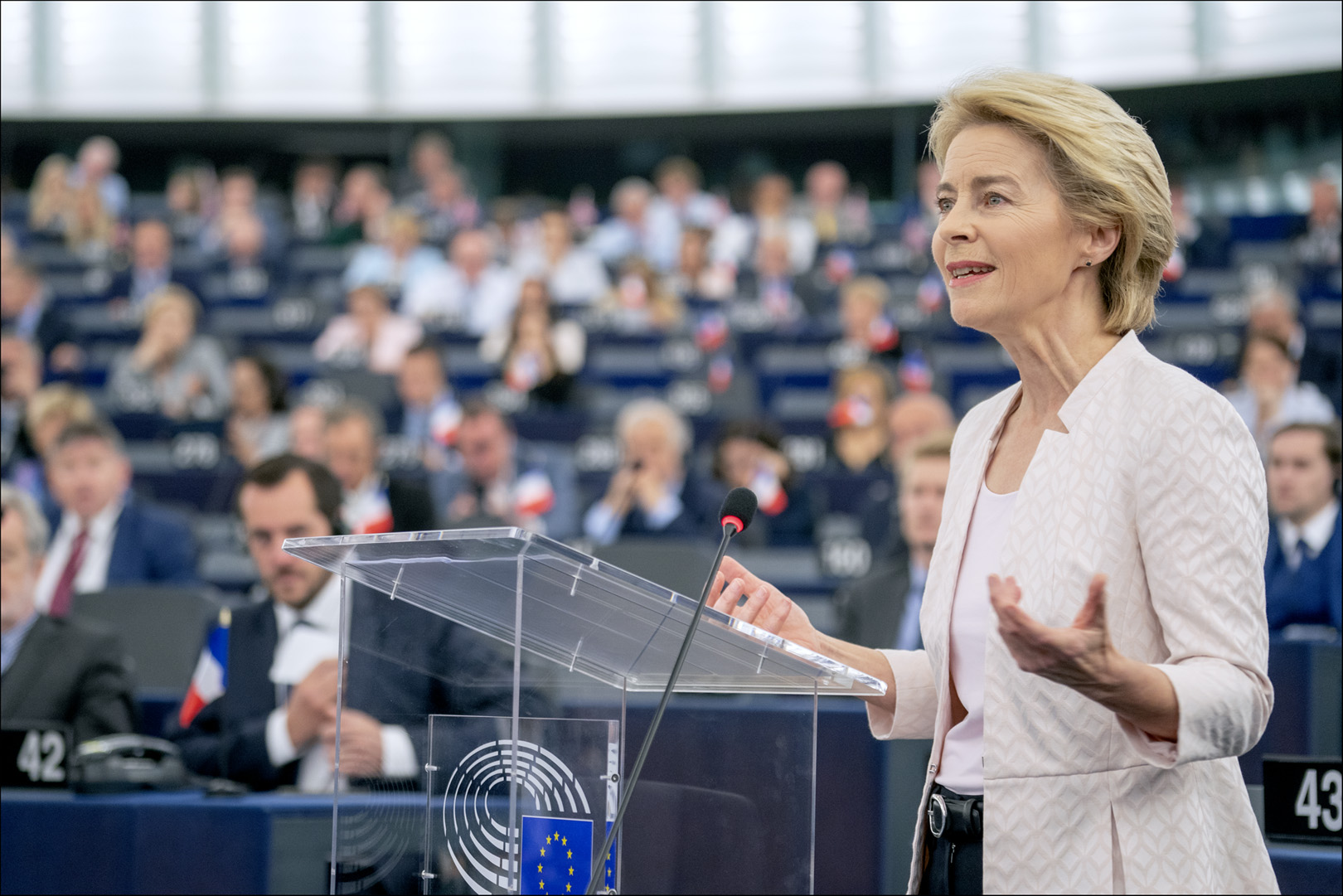 The entry into office of the MEPs elected in May 2019 and the establishment of the European Commission chaired by Ursula Von Der Leyen on the 1st of December 2019 have led to tough negotiations on the European Union’s political agenda for the 2019-2024 legislative round. These negotiations make it possible to measure a substantial evolution of partisan, inter-institutional and diplomatic power relations at EU level.

1. Partisan power struggles pushing the EU towards the centre ?

Although the EPP Conservatives remain the leading political force in the European Parliament and the European Council, the partisan composition of the three poles of the Community institutional triangle shows a clear shift towards the centre and left with regard to the 2019-2024 cycle :

– in autumn 2019, the European Council welcomes 10 members of the EPP, 7 members of the PES, 7 members of the liberal-democratic family, 1 eurosceptic (Poland) and two independents (Italy and Lithuania) [1] – this composition will change with the national elections throughout the period 2019-2024;

– more stable, the European Commission’s partisan composition will also be more balanced than between 2014 and 2019, with 9 Conservatives (including the President), 9 Social Democrats, 4 Liberals, 3 Independents, 1 Eurosceptic ans 1 Green.

A more political than institutional interpretation of the new partisan power relations must lead to integrate two other actors in the analysis:

– on the one hand, the “Greens” who, supported by public opinion, will continue to have a powerful influence on EU policies on climate, environmental, economic, social and perhaps external issues;

– on the other hand, members of the Eurosceptic right and the extreme right, who represent more than 20% of the European Parliament, sit in several national governments and have given decisive votes to Ursula Von Der Leyen’s nomination.

This twofold political-institutional influence could lead the more mainstream parties to yield to their pressure in the face of numerous decisions all along the 2019-2024 cycle.

The difficulties encountered during the hearing of the Commissioners-designate and the postponement of the start of the Von Der Leyen Commission reflect tensions that are not new, but whose intensity will have an impact on the functioning of the EU in the coming months and years.

European parliamentarians were elected on the basis of a turnout of more than 50%, which strengthens their legitimacy and their desire to be heard. The hearings of the Commissioners appointed by the Member States resulted in the rejection of three candidates: this is the first time that the European Parliament has been so harsh, and it illustrates its desire to assert itself vis-à-vis the Commission and also the Council, which economic actors will have to take into account throughout the 2019-2024 cycle.

In order to push their advantage but also to highlight their difference, it is very likely that MEPs will be particularly aggressive on the issues they consider to be in line with the expectations of their voters: first and foremost environment and climate, but also consumer and data protection, not to mention the promotion of mobility and trade or, in external matters, support for human rights and development aid.

The profile and surprise choice of Ursula Von Der Leyen, after an unsuccessful first European Council, puts her in a weaker position than her predecessor Jean-Claude Juncker, longtime head of government and inducted by his former peers but also on the basis of the “spitzenkandidaten” procedure promoted by the European Parliament. It is also noteworthy that the two new executive vice-presidencies entrusted to Margaret Vestager and Franz Timmermans were imposed on Ursula Von Der Leyen, on the basis of a compromise reached by the European Council and with explicit reference to the system of “spitzenkandidaten” – this “triumvirate” being completed by the appointment of Valdis Dombrovskis as 3rd Executive Vice-President, at the new President’s initiative.

It remains to be confirmed that this new hierarchical organisation of the European Commission will enable it to be as proactive and coherent as necessary (while its partisan composition is more diverse than the previous one) and whether it will be able to assert itself properly vis-à-vis the European Council and Parliament. The fact that the “Brussels College” can take its decisions by a simple majority is a useful institutional safeguard to guarantee its ability to decide, but does not guarantee the political coherence of its initiatives, nor its ability to have them adopted and applied.

In June, the Heads of State and Government adopted a 2019-2024 agenda of a few pages formalizing a global consensus on priority political orientations in a geopolitical context pushing Europeans to unite more (Russia, Trump, China, Brexit, Erdogan,…). This proclaimed desire for unity nevertheless conceals significant tensions between Member States, which will be resolved on the basis of a more or less open struggle for influence.

The 2019-2024 political cycle opens with the fractures that marked the two previous cycles still to be resolved, and can be described in a schematic way:

– “North-South” (or centre-periphery) divisions generated by the “euro zone crisis” on economic, social and budgetary issues, and personalised by the opposition between the 8 countries of the “new Hanseatic League”[2] and the countries gathered at the “Med 7” summits[3);

– “East-West” fractures generated by the destabilization of our neighbourhood and the “refugee crisis” in terms of migration, identity and security, which crystallized with the affirmation of the Visegrad Group (Hungary, Poland, Slovakia, Czech Republic).

Another dividing line is undoubtedly emerging between countries which, under the aegis of France, want to promote profound changes to the EU (from “Refoundation” to “Renaissance”) and those which accept a relative status quo, of which Germany is undoubtedly a part: if Europeans’ control of their collective security can constitute a common horizon, it is not the same for all that concerns fiscal and social convergence, industrial policy, trade policy, etc.

In this context, the risks of tensions and blockages in the Council are all the greater as Member States take many essential decisions unanimously. These risks seem all the more acute as it will be tempting for many external powers more or less hostile to the EU (Russia, China, USA, Turkey, soon the UK, etc.) to put pressure on individual Member States to prevent the adoption of ambitious European initiatives. The further development of a variable geometry Europe, based on more intergovernmental mechanisms, could be the outcome of such conflicting pressures.

It is by understanding these triple partisan, institutional and diplomatic power relations that citizens, observers and stakeholders must anticipate and shape the main political orientations likely to prevail at EU level during the 2019-24 cycle.

[1] The partisan balance of power in the Council is more balanced since the Romanian government is led by a liberal (while the Romanian President is a member of the EPP) and the Italian government, whose leader is considered “independent”, is composed of many social democratic (and “5-star”) ministers.

[3] Since 2016, the “Med 7” summits have brought together Portugal, Spain, France, Italy, Malta, Greece and Cyprus.

Partagez
﻿
Previous
Choosing EU leaders : for a better balance between democracy and “diplocracy”
Next
On France 24 English to analyse the investiture vote of the Von Der Leyen Commission