The future of Europe is in our hands 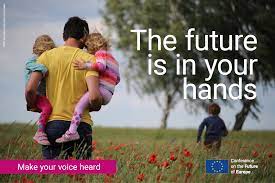 The “Conference on the future of Europe” officially launched on May 9, 2021 represents a rare opportunity to gather the opinions and proposals of its citizens in the face of the many challenges facing our continent. After years marked by the management of successive crises, it is more than ever necessary to take stock and debate the type of Union we want, in order to pave the way for a stronger, more efficient and more democratic Europe by 2025-2030. While the good level of participation in the 2019 European elections reflected the growing interest of French and European citizens in their Union, the Conference dedicated to its future offers them a great opportunity to play a more active role in it – which must be fully seized.

The joint declaration and agenda adopted by the European institutions evokes the main economic, social, environmental, diplomatic and security issues on which the citizens of the EU have a voice. It mentions too cursorily the democratic challenges that also need to be addressed, as it is true that the legibility and transparency of the functioning and policies of the EU must be increased in order to allow it to better combine efficiency and legitimacy. All in all, the roadmap is sufficiently broad to allow everyone to express their views on what they consider to be essential for our continent and to outline short- and medium-term perspectives.

Beyond its intrinsic added value, the Conference on the Future of Europe must lead to highlighting the actors and tools that allow our citizens to express themselves on a permanent basis on European issues, and in particular their parliamentary representatives, the European Commission’s public consultations, the European citizens’ initiatives or the debates organized by civil society… This highlighting will be all the more useful if it turns out that the European institutions have difficulty taking into account the diversity of citizens’ expectations expressed during the Conference.

It is essential to develop the notoriety and the attractiveness of this initiative so that the greatest number of French and European citizens can take part in it, in metropolitan France as well as in ultra-marine territories, in cities as well as in rural areas, at the national as well as regional and local levels.

It is up to us to encourage our fellow citizens to express themselves on the digital platform (www.futureu.europa.eu) set up by the European institutions, which allows them to confront their points of view thanks to simultaneous translation. It is up to us to encourage them to participate in citizens’ panels, whether virtual or “in person”, and to organize multiple conferences and debates allowing them to communicate their perceptions and expectations with regard to European construction.  Finally, it is up to each of us to formulate proposals to reform and advance the European Union, a political necessity that is more acute than ever in these times of pandemic and the emergence of the Sino-American duopoly.

It is particularly welcome to invite European citizens from all walks of life and EU countries to participate in the definition of our common future, which by its very nature will be the result of a commitment by all member states. This Europeanization of debates will be all the more useful in the perspective of the French Presidency of the Council in the first half of 2022, which will have to combine French voluntarism with diplomatic and political pragmatism, since making Europe grow should not lead to transforming it into a “France in bigger”. In this respect, the “PFUE” should be a necessary step in the continuity of the Conference, and the year 2023 should be a point of culmination to prepare for the European elections and the definition of the roadmap for the EU leaders who will take over in 2024.

The future of Europe deserves a great debate – let’s all move forward!

Partagez
﻿
Previous
In Paris : the role of the Regions in the European concert
Next
The future of the European Union deserves a great debate