In Paris : the 1st “State of the Union speech” delivered by Ursula von der Leyen 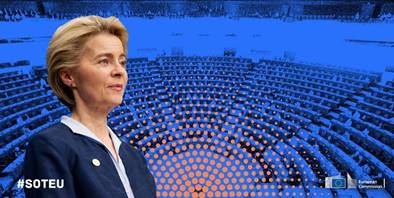 Invited by the Representation of the European Commission in France on Wednesday, September 16, 2020 to debate the first State of the Union speech delivered by Ursula von der Leyen before the European Parliament. This speech will take stock of the EU’s response to the health and economic crisis, in particular the implementation of the “Next Generation EU” recovery plan. President von der Leyen will present her vision for the future of Europe and the next concrete steps towards a “more resilient, sustainable, fair and prosperous Europe”.

A debate introduced by Baudouin Baudru, Head of the Representation in France of the European Commission, moderated by Sylvain Kahn, Associate Professor of History at Sciences Po Paris, and allowing me to speak alongside :

– Bernard Spitz, President of the International and Europe Pole of the MEDEF (French Business Confederation)

– Neil Makaroff, Head of Europe at the Climate Action Network

Partagez
﻿
Previous
Relocating in France with Europe
Next
In l’Express : what assessment for Von der Leyen after one year in office?